Hi ! All, We are Launching Training and Preparatory Course for CSWIP 3.1, 3.2 & BGAS Grade 1 & 2 followed by Seminar and Examination for the First Time in Coimbatore. Last date for Application Jan/08/2020. Limited Seats Apply Now for Your Career Growth and Fabulous Jobs in Oil and Gas/ Refinery/Fertilizer.,Etc in Abroad. Do it Now..Now is the Right Time.
Eddy Current Testing
Skip to content 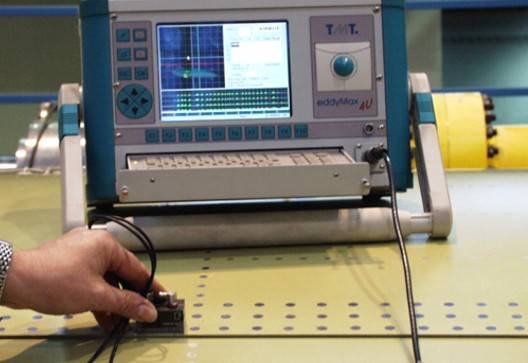 Eddy current testing is one of several non-destructive testing methods that use the electromagnetism principle. Conventional eddy current testing utilizes electromagnetic induction to detect discontinuities in conductive materials. A specially designed coil energized with alternating current is placed in proximity to the test surface generating changing magnetic-field which interacts with the test-part producing eddy current in the vicinity.Variations in the changing phases and magnitude of these eddy currents is then monitored. The electrical conductivity variations or magnetic permeability of the test-part, or the presence of any discontinuities, will cause a change. The changes are shown on a screen for easy interpretation.